The Bunker Review is contributed by Marine Bunker Exchange

There was not any firm trend in world fuel indexes evolutions during the week while irregular changes prevailed. The main supporting factor on the market is still speculation that OPEC talks in the end of September together with non-OPEC producers could result in a crude out-put freeze.

MABUX World Bunker Index (consists of a range of prices for 380 HSFO, 180 HSFO and MGO at the main world hubs) slightly rose in the period of Sep.01-08:

In the U.S. payrolls climbed by 151,000 in August following a 275,000 gain in July that was larger than previously estimated (180,000). The lukewarm jobs report initially dimmed the outlook for an interest rate hike this month, weakening the dollar and bolstering the appeal of commodities priced in dollars as an investment.

The potential deal to freeze oil supply received unexpected support from Russia and Saudi Arabia in the beginning of the week. Vladimir Putin said he'd like OPEC and Russia to reach a deal to freeze supply and expects the dispute over Iran’s participation can be resolved. As per him, oil producers recognize that Iran, which has mostly restored the output halted during three years of trade restrictions, deserves to complete its return to world markets. Russia is reliant on oil and natural gas for about 40 percent of its budget revenues.

Saudi Arabia in turn has given only cautious support to renewed negotiations saying in the beginning that there’s no current need to limit production and a bit later confirming it may go along with an oil-output freeze if other producing countries agree.

Despite of that, there is increasing skepticism that oil producers may reach the agreement. Simply capping output at current levels - rather than cutting production - would do little to limit the persisting surplus. Most of the countries involved are already producing as much as they can, making a pledge to keep output flat irrelevant. The Saudis produced a record 10.69 million barrels a day while supplies from the Organization of Petroleum Exporting Countries climbed by 120,000 barrels a day to average 33.69 million a day in August amid increases by Iran, Iraq and Kuwait.  Russian oil production also jumped in recent days, exceeding 11 mil-lion barrels a day for the first time since at least 1991.

Further reducing hopes of an accord, Russia and Saudi Arabia failed to agree on whether Iran has fully restored pre-sanctions output, key to determining whether it should take part in any freeze. At the moment Iran said it can raise production to 4 million barrels a day in two to three months from the current daily level of about 3.8 million and at the same assured it may soon drop its opposition to an oil-production freeze as crude output is closing in on its pre-sanctions level. However, market has interpreted these comments as a signal that any deal between oil producers in Algiers later this month may have to accommodate more supplies from Iran and there’s still only a small chance that Iran will participate in an output freeze. So even if Saudi Arabia and Russia agree to freeze output, it will only be able to support prices from lower levels without Iran’s participation and to prevent a further drop in prices.

Besides, Saudi Arabia sees Iran as a competitor. If Iran is able to restore production to a level that is similar to that of before sanctions were imposed, the Kingdom could stand to lose some of its market share.

Other OPEC members such as Iraq, Nigeria and Libya are debating whether or not to halt production. Nigeria may also demand the right to restore production after militant attacks curbed output, while Libya will want to boost volumes that shrank to a fraction of pre-conflict levels. It seems that a freeze doesn’t offer many advantages to them and may result in a cut in revenue and increase in the unemployment rate. So if Iran is allowed exemption it’s likely they will break off from the deal as well.

At the same time Venezuela supports Russia-Saudi efforts to stabilize prices while several other OPEC countries also welcomed the joint pledge to cooperate, including the United Arab Emirates, Kuwait and Qatar.

On the whole, existing disagreements within the Organization of the Petroleum Exporting Countries, and especially its key members Saudi Arabia and Iran, are still dimming prospects of collective action to stabilize the market.

Asian countries have been cutting oil supply back as crude’s collapse prompts a wave of spending reductions. It is expected Asia’s top five producers - China, India, Malaysia, Indonesia and Vietnam - will cut output by 255,000 barrels a day this year and a further 309,000 barrels a day in 2017, while, as example, China’s crude imports surged to a record this year and the share of overseas supply in the country’s mix has risen as high as 66 percent. Indonesia has reduced drilling, hurting supply of Minas and Duri crude. The slide in Malaysia’s Tapis output has resumed as well. Shrinking domestic production will mean a greater need for imports that may help support global oil and fuel prices.

We expect market volatility will persist next week, and bunker prices may continue irregular changes and fluctuations with no firm trend. 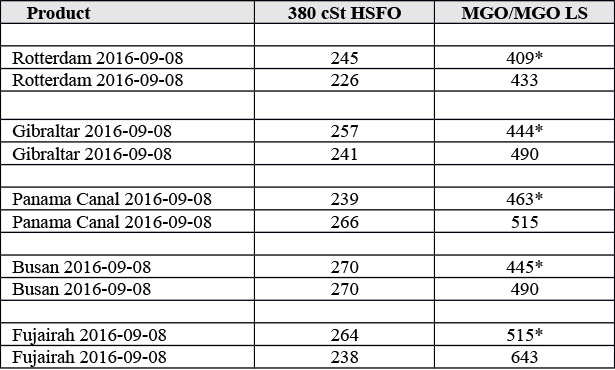