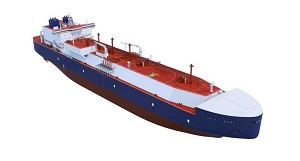 Rosneft says Shipbuilding Complex Zvezda (Zvezda Shipyard in Bolshoy Kamen of the Primorsky Territory) has started cutting steel for the lead ship of the new series, LNG tanker of ARC 7 class. According to the statement, the first steel part was cut by highly accurate plasma gas cutting machine in the presence of shipyard, customer and RS representatives.

It is emphasized that gas carriers were not earlier built in the Russian Federation. Construction of such ships is among the most technologically demanding processes in global shipbuilding. Zvezda is the only Russian shipyard with unique equipment and the most advanced global technologies allowing for implementation of such projects.

Icebreaking gas carriers of Arc7 class will be able to break through ice of over 2 meters thick. The ships will have propulsion units of 45 WM, length of 300 m, width of 48.8 m and cargo tanks capacity of 172,600 cbm. They feature enhanced environmental safety with liquefied natural gas used as the main fuel. The ships will be fitted by three steering thrusters manufactured in Bolshoy Kamen by a joint venture of Rosneft and GE.

In July 2020, Zvezda became the only Russian shipyard that got a worldwide license for construction of LNG carriers with membrane storage system Mark 3. Shipbuilding Complex also signed a license agreement about technical assistance and licensing (TALA) with French Engineering Company Gaztransport & Technigaz (GTT), specializing in development and building licensing cryogen membrane system for transportation and storage of LNG.

In September 2020, SMART LNG, a joint venture of SCF Group and NOVATEK, has signed contracts with VEB.RF Group and Zvezda Shipbuilding Complex to construct and lease ten icebreaking Arc7 LNG carriers. Simultaneously, SMART LNG signed long-term time charter agreements for these ten vessels with Arctic LNG 2, the operator of the Arctic LNG 2 project. In total, contracts for 15 such vessels have now been signed, including shipbuilding, financing, lease, and time charter contracts. The contracts for the lead ship in the series were signed by SCF Group in October 2019, and the contracts for another four sister ships were signed by SMART LNG in January 2020. The ships will be operated under long-term charter contracts between SMART LNG LLC, a joint venture of Sovcomflot and NOVATEK and NOVATEK’s subsidiary Arctic LNG 2 LLC.

The Zvezda Shipbuilding Complex is constructed by the Rosneft-led Consortium upon the instruction of President of Russia Vladimir Putin. The Shipyard’s order portfolio currently exceeds 50 vessels. The Shipyard’s pilot throughput is provided for by Rosneft that placed an order for 28 vessels. Zvezda’s product line will include vessels of up to 350 tonnes displacement, components of marine platforms, ice-class vessels, commercial vessels for cargo transportation, specialty vessels, and other types of marine equipment of any complexity, characteristics and purposes, including those that had not previously been produced in Russia due to the lack of required launching and hydraulic structures.

To design and manufacture electric steerable thrusters for ice class ships, Sapphire Applied Engineering and Training Centre LLC was established in Saint-Petersburg as a joint venture of General Electric and Rosneft Oil Company as well as Sapphire plant in Bolshoy Kamen. They will produce electric steerable thrusters with a capacity of 7.5 to 20 MW.