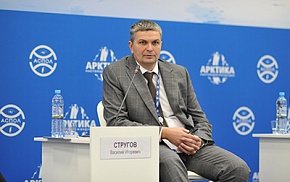 Being a part of the core transport infrastructure, icebreaking fleet of the Russian Federation requires comprehensive modernization. The authorities acknowledge the need. By 2030, they plan to expand the fleet of icebreaker from 36 to 39 units and to reduce its age considerably (from 37 to 25 years). That was announced by Deputy Director General of Rosmorport Vasily Strugov at the X International Forum Arctic: Today and the Future, IAA PortNews correspondent says.

“The Comprehensive Plan for Modernization and Expansion of Core Infrastructure (CPMI) until 2030 foresees a construction of 10 icebreakers worth over RUB 70 billion altogether: two Icebreaker 7 class ships of 18 MW, two Icebreaker 7 support ships of 12-14 MW, four shallow-draft of 6 MW (Project 22740М) for freezing ports in the Caspian and the Azov sea basins and two port icebreakers of 6-8 MW for ensuring year round operation of freezing ports in the Far East basin”, said Vasily Strugov.