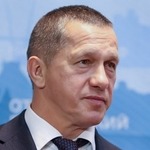 - Let’s start with the social and economic development. We are regularly criticized for paying more attention to economic issues. I want to say that we treat criticisms with respect but we will keep this up. That is because money should be earned before being spent. The same approach will be applied to the Arctic development. Of course, we can join a queue to the Ministry of Finance and ask for three bags of money promising to do everything later but, in my opinion, it a sheer dead end. This blanket hogging will not bring anything.

A system of preferences should be created in the Arctic and it cannot reflect the system of the Far East. It should be absolutely different because the situation in the Arctic is even more challenging with its infrastructure, distances and weather.

Now ... who is to be in charge of it… It is an issue of competence – appointment of deputies to the Minister. We have discussed this issue with Dmitry Medvedev. Arctic issues will be supervised by Aleksandr Krutikov.