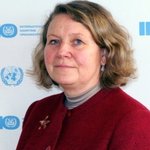 "I think its perfectly possible. I just think that the current assessment of the situation, we should not be overly optimistic in this issue. I do not think that some may think that in the next ten years we will have fully autonomouse ships roaming the oceans with no crew on board. We have connected fears of seafarers that this might have some affects on the employment, that the number of seafarers will go down enormously. What we are seeing at the moment is that there are allready fully automated ships around, but in a niche areas, on very defined routes, near coastal areas, not in open oceans. It is of course the standartisation of all the digital aspects, but it's also the international framework of rules and regulations for shipping that need to be adapted. Had we not the pandemic we would have finished in May a scope of exercises... to see how it works, would have book packages dished out. We still have SOLAS provision that captain has to be onboard, for instance, that would exclude fully automated shipping with no crew from the outside. There are many other smaller aspects that have to be considered. Yes, work is going on, but I do not see this happening in the near future at the global scales, I must say."