No chance to stay afloat without financial support 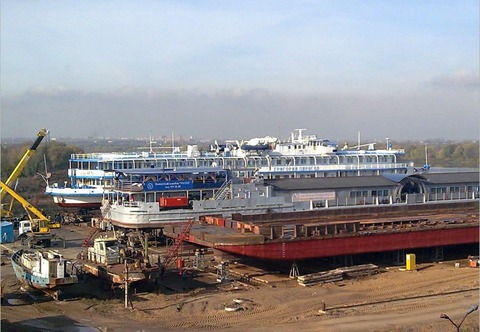 Almost all ship repair yards of Russia, regardless of competition with foreign counterparts, have limited opportunities to upgrade and develop their production facilities. Deterioration of the country’s ship repair base will continue unless the state offers economic incentives for private investments and launches support mechanisms.

Each ship owner is to decide where to have its fleet serviced and repaired. The criteria to opt for a site are evident — cost, time and reputation. “All the three factors are quite volatile and should be updated for each case. It’s necessary to have your finger on the pulse. Every day”, says Gennady Yegorov, General Director of Marine Engineering Bureau.

According to Sergey Kiselyov, representative of Northern Alliance LLC, first of all a shipyard is selected to meet the ship parameters and to have a technical ability for placing it in a dock or at a lay berth. The plant should also have cranes of required lifting capacity and operating radius. Then, geographic location of a yard is taken into consideration with respect of ship base location, cost and time of repair. The accumulated information is analyzed to choose the most cost efficient yard. “Quite often it is not the cost of repair but the distance to the yard and the time of repair that outweighs since freight loss can exceed the cost of repair”, says Sergey Kiselyov.

To meet the requirements of ship owners and to win a contract a shipyard should be competent enough to offer high quality and timely repair and it should have hi-tech equipment. However, ship repair yards have no resources to upgrade their equipment, especially for capital-intensive one.

“As a rule, shipyards are able to perform a complete range of repair works. They have a sufficient competence and a stock of components. Yet, the problem is often with the ability to accommodate ships. It is a problem of all ship repair and shipbuilding yards as they have not seen asset investments from the Soviet Union time, — emphasized Aleksandr Oleynikov, Chairman of Azov Shipyard BoD. — Up to RUB 500 million of investments is needed to build a modern ship elevator of up to 5,000 tonnes in capacity. Unfortunately, there is no mechanism today to finance the construction of fixed assets like ship elevators. Therefore, ships leave for other countries to be repaired.”

Another problem of Russian ship repair yards is the high depreciation of other fixed assets. Floating docks in Russia (there are 39 of them in the country) are over 40 years old on the average. “Ship repair is not possible without floating docks. Russia does not build them today and there are no plans to commence. Only major state customers that cannot have their facilities repaired abroad are an exception”, says Gennady Yegorov. In his opinion, it is time to revive the manufacture of docks, which is actually impossible without a state support because floating docks do not pay back by dock rates even for 50 years of operation. “That is like a bridge over a river — it does not pay back directly but there is no other way to link the banks”, he explains.

Without modernization and replacement of fixed assets, Russian ship repair yards started loosing their competitive advantage and the ships are repaired in other countries while domestic companies see a decrease of financial and economic performance.

The above mentioned situation is typical for both seaborne fleet and ships of mixed sea/river navigation. Owners of river going vessels have their fleet repaired and upgraded only in Russia since such ships cannot cross the border. “IWW ship repair in Russia does not compete with that of other countries as the companies are located in the center of Russia”, explains Nefteflot CJSC.

On the plus side, some companies are able to respond to the shortage of ship elevating and launching facilities. For example, a decade ago Port Kolomna built a slip able to handle ships of up to 2,000 tonnes in weight and up to 115 meters in length. “It meets all our demands and there is no need to build a dock. We invested our own resources. It was a cost-intensive project but it paid back for quite a short period of time - 5 years. We actively involved the slip for repair of our ships. Otherwise, we would have to use other production facilities. Having repaired our fleet we embarked on implementing ship repair and construction works for the third parties and we already make profit on it”, tells Aleksandr Alekseyev, Deputy to General Director of Port Kolomna JSC.

To a great extend, the success of that project should be attributed to the fact that the shipping company (its fleet numbers 110 units) also has its own shipbuilding and ship repair subdivision. This sort of synergy lets distribute financial flows and particularly direct them to upgrading of fixed assets.

Other companies engaged in river fleet repairs are not so successful. “When conducting ship repair works, a plant normally faces a problem with its customers short of financial resources. The customers usually operate a worn out fleet that requires repair but they do not have finances for that repair. Therefore, many plants provide repair services on credit”, says Nefteflot CJSC.

Obviously, the majority of ship repair yards have been in dire need of investments in development and modernization of fixed assets for many years. The situation can only be reversed with the state support. It is sufficient to apply the experience of other sea powers that managed to take leadership in the global market of shipbuilding and ship repair. Among them are S. Korea, China and Turkey.

S. Korea, the world’s leader in shipbuilding and ship repair, provides the industry with state credits at preferential rates. A zero rate of value added tax is set in the country for ship repair and shipbuilding. In Russia, zero rate of VAT has been under discussion for 20 years already but things aren't moving.

Nefteflot CJSC believes that essential measures of state support could include preferential loans at rates not exceeding the base rate for working capital financing as well as subsidized loans or preferential leasing for purchase and modernization of equipment.

The legislation in the field of shipbuilding and ship repair should be changed drastically. “Without an access to interest-free loans we cannot compete on equal footing with Chinese, Turkish and Korean companies”, believes Aleksandr Oleynikov. Besides, it is necessary to establish resource centers of shipbuilding and ship repair for accumulation of new technologies. That will let avoid technological inferiority of domestic ship repair. In his opinion, such centers can initially provide information and offer training and re-training services.

Aleksandr Borshch, Executive Director of the Don Water Transport Association, governmental assistance is crucial today for training of ship repair specialists. “Shipbuilders are trained in Saint-Petersburg and Nizhny Novgorod while it is a big problem in our region”, he emphasized.

Without the Government’s will and decisions it is impossible to reverse excessively heavy customs regulation. “Revision and facilitation of administrative procedures of the Federal Customs Service and customs clearance of materials, spare parts and equipment used for repair of foreign ships and delivered from abroad during the repair process could significantly support Russian ship repair yards and let them compete on equal footing with their foreign counterparts”, added Kanonersky Ship Repair Yard CJSC.

State support measures mentioned by the industry community have already demonstrated their efficiency beyond Russia. International practices could prove to be useful when transferred to the reality of Russia. It would make for the ultimate objective of the changes — creation of a competitive national ship repair industry which could offer services on repair and maintenance of commercial fleet on a high technological level.